FarmBot is the future of farming

Farming is the major need of the hour. With increasing need to provide food and the faulty farming methods adopted these days, a savoir had to take birth to protect us from dying of chemicals and artificial food. FarmBot Genesis was created to combat this issue. It has been developed to bring a revolution in the farming sector and also to automate the process.

Present day scenario is quite different from what it used to be in the olden days. Manpower has decreased, soil and water are polluted while the need for produce has increased drastically. FarmBot Genesis was the first FarmBot to be developed to increase to production of food in the world.

It will directly improve the lives of the farmers and also the quality of crops. Many of you must be wondering how is it possible! Let me first introduce you to FarmBot. FarmBot is an open source precision agriculture CNC farming project. It consists of a cartesian coordinate robot farming machine, a software to command him and a database containing the farming data repository. 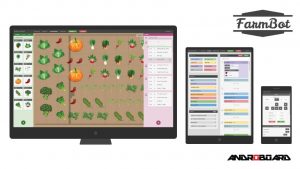 So how exactly is it helpful for farming? FarmBot robot takes instructions from you. You just have to graphically design your farm using the software and synchronize it with the robo. It will sow the seeds for you, water it accordingly and its sensors can detect changes in humidity or temperature. FarmBot monitors your crops diligently, checks moisture and detects weeds as soon as they emerge. FarmBot is capable of planting over an area of 2.9 meters × 1.4 meters with a maximum plant height of 0.5 meters.

Using this technology, you can start growing polycrops and rotate crops with seasons. If you check out its software, it is not too complex. It is a simple web interface that helps the farmer to control FarmBot. All you need is a farm, water source, electricity, internet connection and a shed. You can also integrate Farmbot with solar power generators.

Since, it is an open source project, you can either build it by yourself under the instructions given on the FarmBot Genesis website or you can also order your FarmBot Genesis from farmbot.io. It is largely built for small spaces, so when you get your parts delivered you can configure it according to the size of your farm. I believe an awareness has to be bought amongst our farmers regarding FarmBot. It has far reaching potential to improve the future of farming and added benefits for farmers.